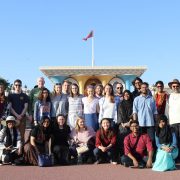 Last week, I took a taxi to go to Casa Blue Café to watch a football game on the big screen. I got to talking with the driver, trying to make small talk with my newly learned Arabic. He asked me what it is I do in Oman. I paused to think. How do I describe my work at Al Amana in a few sentences? How do I put interfaith dialogue into words in a way that can be easily understood? Albert Einstein said that if you can’t explain something simply, you don’t understand it well enough.

I recently read a book written by Jukka Hautala, regional director of the Middle East for Felm. The book contains a collection of 49 hand-picked Greek words that have been elaborated and examined closer for readers to meditate and contemplate upon. Out of those 49, two stood out to me in particular: dialogizomai (to consider), and metanoia (transformation). In the spirit of Einstein, I would describe the work of Al Amana with these two words.

Dialogizomai is where dialogue comes from. However, it didn’t originally mean an exchange of words between two people. Dialogizomai is essentially an inner process of pondering, considering and thinking, that can be expanded to a similar process between two or more people. What it is not, therefore, is a debate or contest of ideas. Hautala writes that wisdom doesn’t reside in one mind, but is created in interaction. By engaging with people from vastly different societies with different beliefs and customs, we challenge ourselves to begin to look at our own beliefs more critically. While this process may often raise more questions than it answers, it sets the first step towards seeing the bigger picture and realizing how much we are products of our surroundings.

The ultimate goal of facilitating dialogue is to challenge participants to begin to critically examine the way they see the world. Willingly exposing yourself to foreign ideas and thus challenging yourself is essential to growth. That is the meaning of metanoia, the other word from Hautala’s book. He describes metanoia as an expansion of one’s perspective, adopting ideas from outside your personal box. What was known before changes scope and settles into new frames.

Two groups of students, one from Notre Dame University in South Bend, Indiana, and another from Notre Dame University Bangladesh in Dhaka, came to the Centre for a week-long programme right before the world shut down because of the Corona virus. The aim of the program was to engage the two different student groups in discussion over not just their personal beliefs, but also how religion and politics interact in the world. At the start of the program, a professor from Notre Dame said that by bringing the students to Oman, they hoped to make both groups “equally uncomfortable” in a strange setting, so that neither side would have the advantage of playing in their home arena. They also got to see how religion plays different roles in different societies – in Oman, Islam and Christianity may appear differently compared to Bangladesh or the USA.

Sometimes the students left the sessions feeling uneasy and uncomfortable because of what they had heard. However, the goal wasn’t to reach a consensus on what the right answer is, but to realize how much our perspectives depend on where we come from and how we have been raised and taught. At the end of the week, the two groups parted as great friends, knowing that there are topics they do not agree on. Perhaps some wisdom was created in their interaction.

I won’t tell my next taxi driver about dialogizomai and metanoia. However, I will keep reflecting on the importance of maintaining and building dialogue between different worlds. There won’t be any more groups coming to the Centre this Spring, but we can continue to have conversations with the people we know here in Oman. 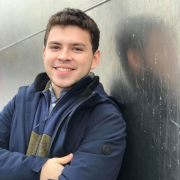 Reflections on Scriptural Reasoning: Exploring my Christian Faith with the Help of my New Muslim Friends

New to Oman - Opening a door to unknown
0 replies

Video: Fireside Chat with Mohammed and Jeff
Scroll to top